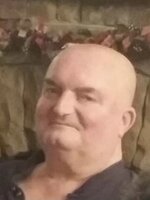 Jeffrey Stephenson, 74, a lifelong resident, passed away unexpectedly at home on August 22, 2021. Jeff was born in Ilion, son of Jack and Ruth Stephenson. He attended Ilion High School and was drafted into the Marine Corps serving in Vietnam, immediately after High School. Jeff worked along side his father at Swan Pools, then with his wife Nancy and son Todd carrying on the family business. Although Jeff’s medical issues left him permanently disabled and in a Power Wheelchair, he could be found motoring down the streets of Ilion on a daily basis. His zest for life and hard work were qualities to be admired. Survivors include his Sister Jill (Tom) of Salisbury Center, daughter Tonya (Sue) , Grandaughter Jordyn, Grandson Aryn of Albany, son Todd of Ithaca, Dana of Ilion, grandsons Colin & Xavier. Jeff was predeceased by his wife Nancy and infant daughter Lynn who died in 1969 and his brother Jon. He will also be sorely missed by Jeremy, Bill, Ed and the entire Swan Pools Crew. There will be no calling hours. A private service will be held at the convenience of the family.