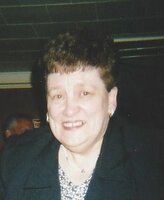 Ilion - Beverly McDaniels Eaker, 82, of Ilion passed away on Saturday, November 20, 2021 at The Grand in Ilion with her family by her side. Becky was born on February 4, 1939 in Ilion, the daughter of the late Edith Jarvis McDaniels. She was a graduate of Ilion schools. On August 10, 1960, she was united in marriage to Charles Eaker in Intercourse, PA. Chuck passed away on December 31, 2014. Becky worked as a secretary for J. Grippe Industrial Supply in Frankfort until her retirement several years ago. She also enjoyed bowling and going to the casino with Chuck. Becky is survived by three sons, Keith Pettengill of Rome, David "Big D" and his wife, Cheeko Pettengill and Charles and his wife, Lisa Eaker, all of Ilion; two daughters, Karen Eaker Hazlett and her husband, Bill of Ilion and Cathy Wheelock of Frankfort; several grandchildren, including a special "Perfect" (according to her) grandson, Brett Charles Eaker and his wife, Dana as well as several great-grandchildren. She is predeceased by a son in law, Kevin Wheelock. In keeping with Becky's wishes, there will be a private graveside service at convenience of her family. Friends and family are asked to please consider memorial donations, in Becky's name, to the American Cancer Society, 100 Lomond Ct. Suite 1, Utica, NY 13502. To leave condolences for Becky's family, please visit www.whiter-hendrix.com