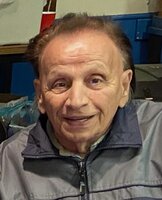 Mohawk - Mr. Harold F. Rappa, 80, of Mohawk, passed away peacefully at home on October 13, 2022. Harold, affectionately known by his friends as “Rags,” was born in Utica on September 8, 1942, the son of the late Joseph and Mildred Kukies Rappa and he attended Frankfort Schools, graduating with the class of 1962. He was employed with Gehring Tricot in Dolgeville for over 40 years until his retirement in 2020. He was a communicant of Our Lady Queen of Apostles Church in Frankfort as well as the Church of the Annunciation in Ilion. He enjoyed landscaping, playing poker, stopping at Stewart’s for coffee with his friends and was an avid Yankee's fan. Harold is survived by his beloved children, Nicole Groomes of Ilion, Richard Rappa and his wife, Devon of Ilion and Monica Price of Minnesota; two brothers, Michael Larocco of Florida and Joseph Kozlowski of Little Falls; two sisters, Selena Rappa-Jackson and her husband, Kevin of Rhode Island and Jeanette Scholemer and her husband, Jerry of Illinois; his beloved grandchildren, Lilly, Pippa, Tripp, Xavier, Laila, Cedrick and Arianna and his special nieces and nephews, Mark Donnelly, Elaina Donnelly, Paul Donnelly, Eric Rappa, Sharon Rappa-Calarco, Brenda Thomason and Audrey Teller. He was predeceased by one brother, John Rappa. Services will be held on Thursday, October 20, 2022 at 10:30 AM in Our Lady Queen of Apostles Church, 412 S. Frankfort St. in Frankfort, where a Mass of Christian Burial will be celebrated by Father Paul Catena. Calling hours will be held on Wednesday, October 19th from 4-6 PM in the Whiter-Hendrix Funeral Home, 100 Otsego St. in Ilion. To leave condolences for Harold's family, please visit www.whiter-hendrix.com