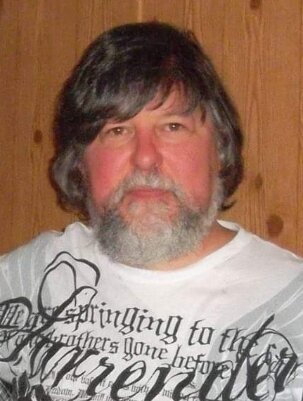 Please share a memory of John to include in a keepsake book for family and friends.
View Tribute Book
Ilion - John Paul Gallogly, Sr. 58, of Ilion, NY was born February 26th 1963 and passed away among friends on December 28th 2021. He had an associates degree in Mechanical Engineering from MVCC and graduated at the top of his class. He is predeceased by his parents Carol and John O. Gallogly. He is survived by his daughter, Reannon Lloyd and her spouse, Bill Lloyd with their children, Lilah and William; his sons, John Gallogly, Jr. and David Gallogly, with his spouse Janel and their children, David Jr. and Elijah and his daughter, Kayla Gallogly as well as his sister, Ruth Neff and her spouse, Glenn Neff and their children and families. He also leaves behind extended family including Connie and Thomas as well as close friends. He loved God, nature, movies and music best, but his interests were wide and varied and included chess and astronomy as well. He walked in the woods often and canoed every chance he got. Calling hours will be held on Friday January 14th between 5 and 7 pm at the Whiter-Hendrix Funeral Home, 100 Otsego St. in Ilion, NY. The family will be holding a private memorial at a later date. To leave condolences for John's family, please visit www.whiter-hendrix.com
Friday
14
January

Share Your Memory of
John
Upload Your Memory View All Memories
Be the first to upload a memory!
Share A Memory
Send Flowers