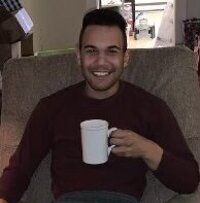 Please share a memory of Bryce to include in a keepsake book for family and friends.
View Tribute Book
Herkimer - Bryce Tyler Jewell, 24, of Herkimer, passed away unexpectedly on January 2, 2023. Bryce was born in Little Falls on April 12, 1998, the son of Amy Jewell Clements and Jon Clements and he attended Central Valley Academy in Ilion. He loved fishing, camping and hunting. He is survived by his mother, Amy Jewell Clements; his father, Jon Clements; grandparents, Jack and Karen Jewell and Eleanor Clements; one sister, Amanda Clements-Creedon and her husband, Matthew; one brother and sister, John and Lisa Clements and several aunts, uncles, cousins and friends of Ilion, Mohawk, Herkimer, Frankfort and Vermont. He was predeceased by his grandfather, William Clements. There will be no public services. He will be laid to rest in Cedarville Cemetery later in the Spring. Arrangements are under the direction of the Whiter-Hendrix Funeral Home, 100 Otsego St. Ilion, NY 13357. To leave condolences for Bryce's family, please visit www.whiter-hendrix.com
Online Memory & Photo Sharing Event
Online Event
About this Event

Look inside to read what others have shared
Family and friends are coming together online to create a special keepsake. Every memory left on the online obituary will be automatically included in this book.
View Tribute Book
Services for Bryce Jewell
There are no events scheduled. You can still show your support by sending flowers directly to the family, or planting a memorial tree in memory of Bryce Jewell.
Visit the Tribute Store

Share Your Memory of
Bryce
Upload Your Memory View All Memories
Be the first to upload a memory!
Share A Memory
Send Flowers